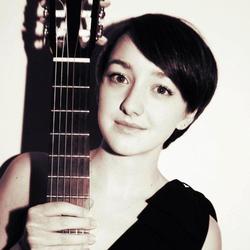 Emma recently graduated from the Royal Northern College of Music where she gained a Master of Music (Solo Performance) and a PgDip (Solo Performance), studying with Craig Ogden. She completed her BMus (Hons) at The Ian Tomlin School of Music, part of Edinburgh Napier University, under the tutelage of Simon Thacker.
Emma is a dedicated and experienced chamber musician and has twice won the Rita Quinney Medal for ensembles in the Edinburgh Festival of Music and Speech, in 2010 in duo with violin and in 2011 with the Edinburgh Napier Guitar Quartet. She was invited to play in the prize-winner's concert at The Queens Hall in Edinburgh on both occasions. Emma has performed at many other venues in Scotland including the National Galleries, the Queens Hall, Edinburgh Castle, St Giles Cathedral and for the Edinburgh Society of Musicians and Haddington Concerts Society.
Since moving to Manchester Emma has performed both solo and chamber music recitals throughout the U.K. in venues such as St Martin-in-the-Fields, The Bridgewater Hall, The Pavilion Arts Centre and for Lake District Summer Music, Buxton Festival, Cardiff Guitar Festival, Nanpantan Festival and Ribfest. Emma recently gave a solo recital at Manchester’s Bridgewater Hall as part of their Bridgewater Introducing series, which allows emerging artists to demonstrate their talent and share their music with a wider audience.
She has performed in masterclasses with guitarists including Gerald Garcia, Carlos Bonell, Mark Ashford, Robert Brightmore, Chris Stell, Paul Galbraith, Julian Byzantine, Edoardo Catemario, Elena Papandreou, Gary Ryan and the Aquarelle Guitar Quartet.
Emma is the recipient of awards from The Cross Trust, Mirium Gunn Musical Award, The Hope Scott Trust and The Sir James Caird Travelling Scholarship Trust and was awarded the Ian Spencer Fox Guitar Bursary from the RNCM.